Where do Film Posters Appear? by Myles McCaulskey

Film Posters are generally used for the positive promotion and portrayal films released by a company. It can be seen as a form of awareness for the Film as it deployment is spread across a city in various locations that catch the film’s target audiences’ eye intriguiging them and persuading them to watch the film. The deployment of Film Posters is supposed to catch the audience out and visually challenge them into finding out more information via the trailer or any other ways the film is being promoted before its release. This supports the view on the notion that an average member of the public will see film posters about 10-15 times a day whether it being the same movie or a variety of different film posters. Whether on the side of the bus or on the Underground, Film Posters are tools that help to persuade the audience into becoming more interactive will a new film coming to the cinemas. Here is an example of where a member of the public may see film posters: 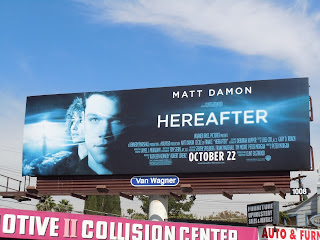 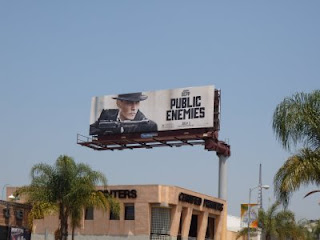 As you can see here we Film Posters are displayed on large billboards usually on roads and motorways and particularly aimed at Drivers. The title of the Film in question is commonly in a large font in order for the audience to see the name of the film and a picture to accompany the title of the film. This is seen in both the 2010 Clint Eastwood Production of “Hereafter” and also the 2009 Michael Mann production of “Public Enemies” both billboards support my notion that the title of the film is enlarged in amalgamtion with the main picture in order for the audience to gain a quick snapshot and general knowledge of the Film ready for release.
Train Stations and Trains: 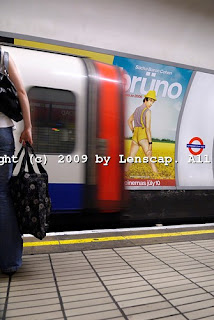 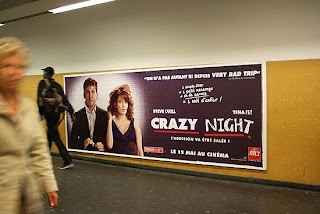 As you can see here we Film Posters are displayed in train stations for commuters and citizens of the location during their ventures to work or school etc. Similarly to Billboards, the title of the Film in question is commonly in a large font in order for the audience to see the name of the film and a picture to accompany the title of the film. This is supported by the 2009 Larry Charles Production of “Bruno” which has the main character Sasha Baron Cohen on the front and the 2010 Shawn Levy Production of Date Night with the two main stars on the front of the Film Poster. Film Posters in train stations are frequently seen so the possible aim of film posters in this location is to provide a snapshot, but also a lasting message in the target audiences head as the same film poster may be seen multiple times in a single day.
Bus Stops and Buses: 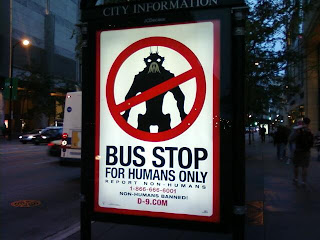 As you can see here we Film Posters are displayed on Buses and Bus Stops. These in corroboration with Film Posters in Train stations are aimed at the John Doe commuter heading to work or school etc. usually on roads and motorways and particularly aimed at Drivers. Film Posters like the one seen in the picture illustrating the 2009 Neill Blomkamp production of District 9 are teasers which encourage the audience to take interest by putting a piece of the film best element in a poster intriguing the viewer into more information. This is seen in the poster at the Bus Stop which shows an alien sign exclaiming “For Humans Only” which would hope to encourage media interest in the film without giving too much away in the film poster. This is a smart ploy to encourage the audience into looking into depth of the film. In this case its District 9. Moreover, Film Posters on buses are similar to the job of film posters in train stations.  As most people head to bus stops or walk past buses multiple times each day the aim of this poster is to leave a message to the audience about the film and cause interest this is illustrated by the picture above which is advertising the 2005 Joe Wright Production of Pride and Prejudice. Film Posters at Bus Stops and on buses are aimed to leave a lasting message to the audience leaving an impression of interest about the film on the target audiences head.
Cinemas: 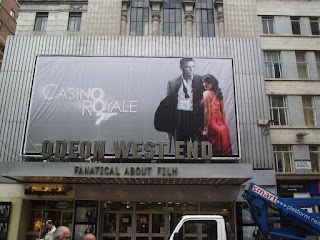 As you can see here we Film Posters are displayed in cinemas for the media interest of the cinema going audience and also the interest of anyone interest in up coming films at the cinema. Film Posters at the cinema primarily say the name of the film and a picture to illustrate a glimpse of the plot. This is supported by the 2006 Production of “Casino Royale” which has the main character Daniel Craig Film Posters at the cinema  provide a snapshot,  to the upcoming films stationed at that institution but also the future films released by Hollywood etc.
Finally, with the influx of the online generation Film Production companies have exploited the use of the Internet to enhance film posters. This has seen a new wave of online film posters circulate across the World Wide Web. These are primarily seen as Flash Multimedia on Youtube or other social networking sites where browsing is at its maximum. This is to attract a large number of audiences who will see the Online Film Poster and be drawn into interest about the film poster in question, This is seen as between the 17th January 2011 -25th January 2011 the 2011 Production of the Green Hornet was seen as a Flash Film poster on Youtube. More so, on the Online IMDB or Internet Movie Database which shows online film posters to its audience each day. The use of the online film poster seems like the best step forward for the Film Poster as many more people are networking and browsing online then reading magazines e.g. the "Internet Age"
Posted by Myles McCaulskey at 10:02